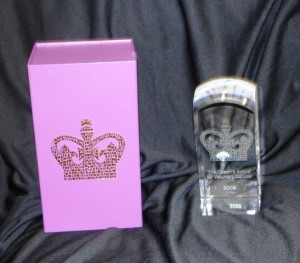 The Queen pays tribute to a Pembrokeshire volunteering group with prestigious Award.

St John’s Community Hall Management Committee from Pembroke Dock has been announced as one of 95 volunteering groups from across the UK winning this year’s Queen’s Award for Voluntary Service, recognising the outstanding contributions made to local communities by groups voluntarily devoting their time for the benefit of others.

The prestigious National Honour, which is equivalent to the MBE, sets the national benchmark for excellence in volunteering, and the activities of those awarded have been judged of the highest standard.

St John’s Community Hall Management Committee has received the Award for its work in running a vibrant community centre through its team of dedicated volunteers who provide a wide range of activities to support all age groups within the community of Pembroke Dock.

Winners of this year’s Award were selected from 406 groups nominated by members of the public who have been helped personally or witnessed the benefits of a group’s work in their community.

St John’s Community Hall Management Committee will receive a certificate signed by the Queen and an exclusive commemorative crystal. These will be presented by Her Majesty’s representative in Pembrokeshire, HM Lord Lieutenant of Dyfed, Hon Robin Lewis OBE, at a special ceremony arranged by the Lieutenancy office. Group representatives have also received an invitation to a Royal Garden Party event at Buckingham Palace in the summer.

Speaking of their success, Hall Chairman Mrs Vanessa Owen from St John’s Community Hall Management Committee said: “We are all thrilled to have received this prestigious honour for the work which our wonderful volunteers do with our weekly seniors Lunch Club, Mothers & Toddlers group and the many other activities which take place regularly in St John’s Community Hall.”

“Volunteering binds communities together and builds a stronger and kinder society. Often these unsung heroes go about their work without much recognition, that’s why I’m particularly pleased to see their efforts recognised and rewarded by the Queen’s Award for Voluntary Service.”

More than 700 groups around the UK have now won the Queen’s Award for Voluntary Service, over the seven years since it was created by Her Majesty to mark the occasion of her Golden Jubilee in 2002.